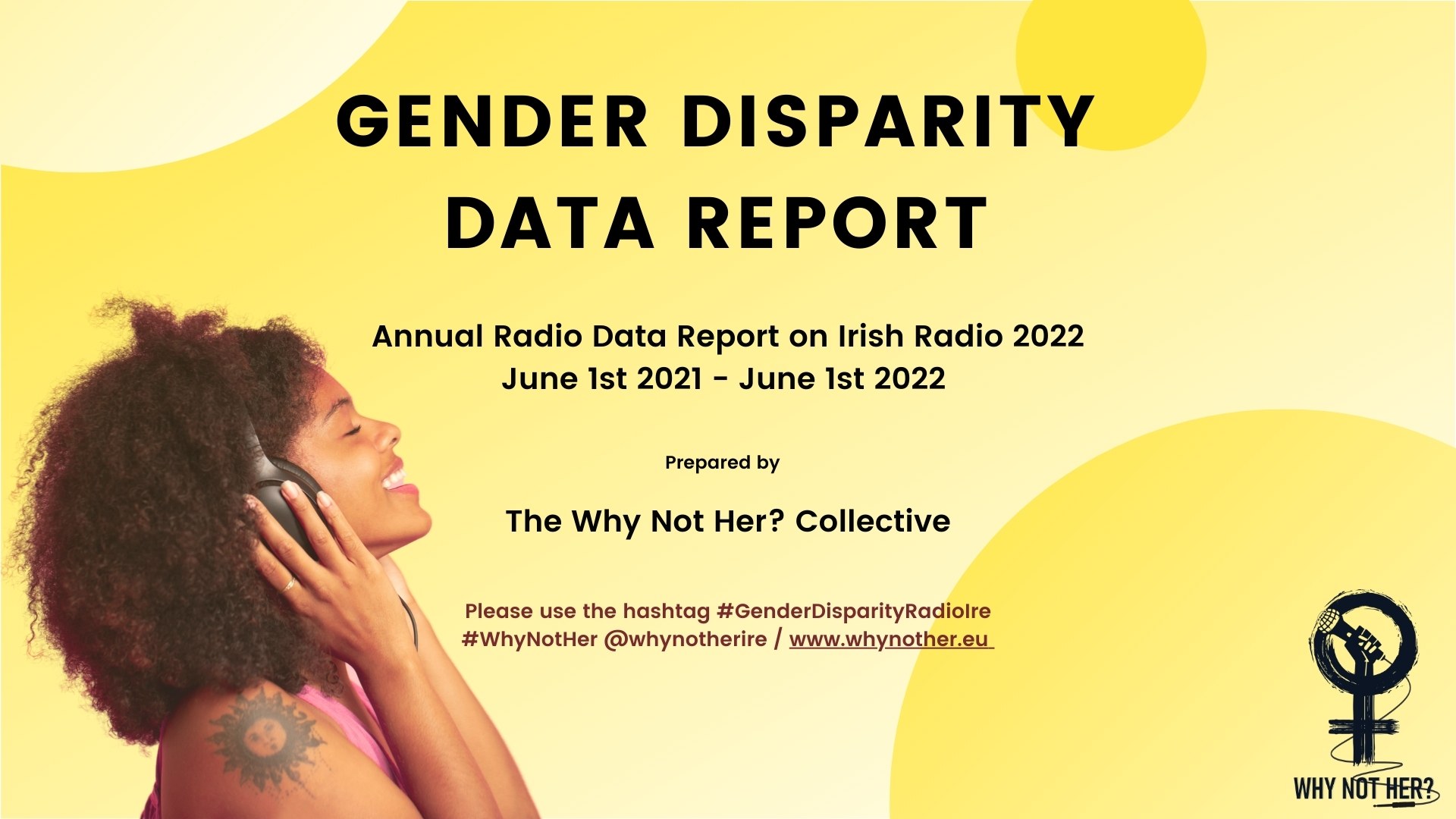 >>>3 YEARS ON AND IRISH RADIO SHOW SIGNS OF SUBSTANTIAL CHANGES TO PLAYLISTS AS ‘OVER 10 STATIONS’ NATIONWIDE SHIFT TO GENDER PARITY & DIVERSITY – HAILED AS THE ‘EQUALISERS & GAME CHANGERS’ OF IRISH RADIO!

>>> NEW BROADCASTING BILL (Gender, Cultures & Other Diversities) aims to retune Irish Radio as Why Not Her? calls for a cross-party initiative in the Irish Government across all Political parties to back women’s Voices and Artists of Diversity on air.

LINK TO VIEW THE REPORT PRESENTATION HERE on Canva:

Please use the #WhyNotHer for any posts online.

On Pages 63 – 65 – of the report, you will find a Game Changer Equaliser section where we list all the amazing radio stations that have shifted towards Gender Parity by at least 25% of their playlists featuring female-identifying artists. This is a big step in the right direction and shows that it CAN be done when a radio station decides to embrace DEI.

The Top 100 Most played songs in Ireland in 2021 section from page 66 onwards is really interesting! We feel this data will be of interest to many.

On July 7th the team at Why Not Her? are meeting at Leinster House with Senator Marie Sherlock of the Labour Party and many others to put forward an amended Broadcasting Bill (Gender, Cultures & Other Diversities) that ‘aims to retune Irish Radio’ towards gender parity and diversity.

Why Not Her? call on all TD’s Senators, Ministers and Politicians to join in a cross-party initiative to support the new Bill that has been drafted. The collective invites everyone from the music scene and anyone who is a feminist to join them at 1 pm at the gates of Leinster House to support and ask the question Why Not Her?

Comments from Why Not Her?

COMMENT FROM LINDA COOGAN BYRNE – FOUNDER OF WHY NOT HER? & DATA ANALYST:

“Since publishing the first Gender Disparity Data Report, I have been blacklisted, threatened, had my social media accounts hacked and deleted… I have been removed from some of my peer groups within the music industry and financially affected for simply asking the question Why Not Her? I also had a book I had been writing about this whole journey, hacked and deleted. A complete invasion of my privacy and an attack on my livelihood.

However, it will not deter me from seeking equality and diversity along with inclusion within the music industry. I’d like to thank the Changemakers and Equalisers in broadcasting and indeed the industry who have viewed the data Why Not Her? has put together, and instead of turning a blind eye to it, have used it as a vehicle for change. Which is what it was intended to do. I welcome everyone to do the same.

There is a diverse multicultural vibrancy that is at an all-time high, this needs to be reflected in the radio stations in Ireland. It is my continued hope that these data reports can continue to set the precipice for a lot of change to come. Change can happen at a quick rate, (as is evident in Spin 103.8, Rte2fm etc) when an unconscious bias is stripped back and when the effort is applied to make the shift towards DEI.

It is a sad situation that we mostly rely on the privileges and power of white men to make the decision as to whether women and artists of colour are good enough to be seen and heard. I hope one day this changes. We will continue as a collective to stand with our colleagues and friends in broadcasting and the music industry in working towards reaching an equal voice for women and artists of colour alongside the LGBTQIA+ community across every facet of Irish culture and we will never be afraid to ask the question Why Not Her?”

COMMENT FROM WINNIE AMA, DATA ANALYST at Why Not Her?:

Change is slow, Irish radio continues to be slow to showcase their own female and minority talent on the radio. We know this year that Irish radio doesn’t have a real issue with all women, but they do have an issue with Irish female artists. Irish radio is playing female music in their Top 100 songs of the year, but those women come from abroad.

International female/non-male music is included in 47% of the international music played, either as solo or gender collabs, whereas Irish women/non-males are only seen in 13% of Irish music in the Top 100.

That is quite a stark contrast and really disturbs me as an artist because it feels like a weird bias to uphold. Especially now in a data climate where we have enough information to highlight that Irish female music does well abroad on radio and we know that it does well at home in live music and streaming, so I hope that Irish radio presenters can de-risk what I only assume is an irrational fear that Irish people don’t want to hear Irish female music.

“It is so fantastic to have this data and it is terrific to see the huge progress made by many stations. It is, however, very disappointing to see the stations that are continuing to fail in the area of gender and diversity. Are these broadcasters best serving the needs of the people of Ireland – or only some of the people of Ireland? Hat’s off to the team at Why Not Her? for the extensive work that has gone into this research…”

Pauline Scanlon founding member of the Fair Ple Collective and

“There have been some really positive improvements which is proof that change is not only possible but can be done quickly and efficiently without compromising musical integrity or quality of output. We hope this can spark change in the stations that lag behind and we are hopeful things will continue to get better. Thank you to Linda and Why Not Her? for their tireless work and their continuous support for women in music.”

Please use the #WhyNotHer for any posts online.

For more on Why Not Her?  see. www.whynother.eu